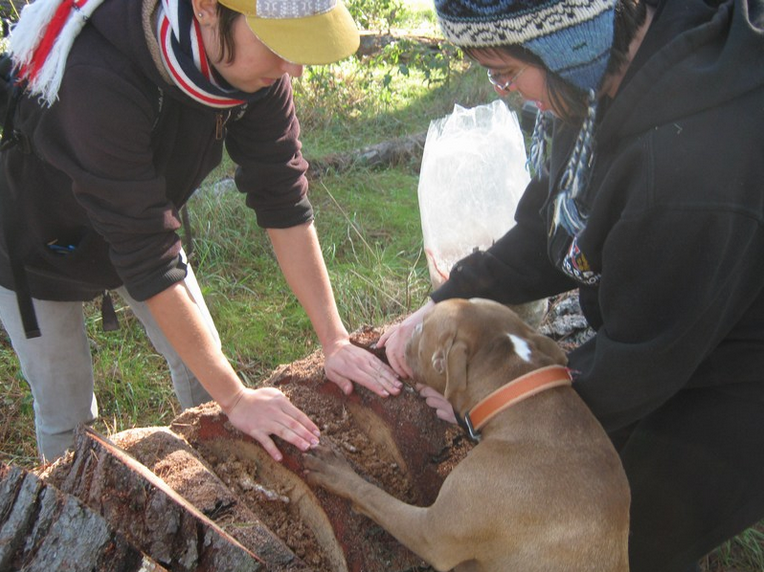 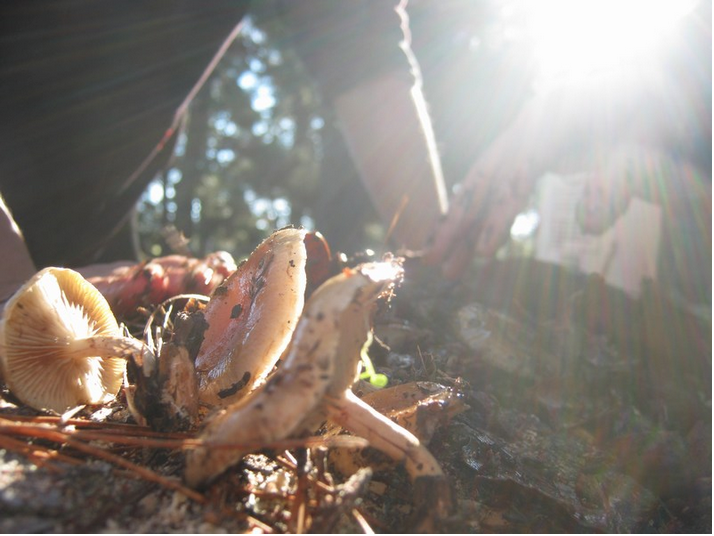 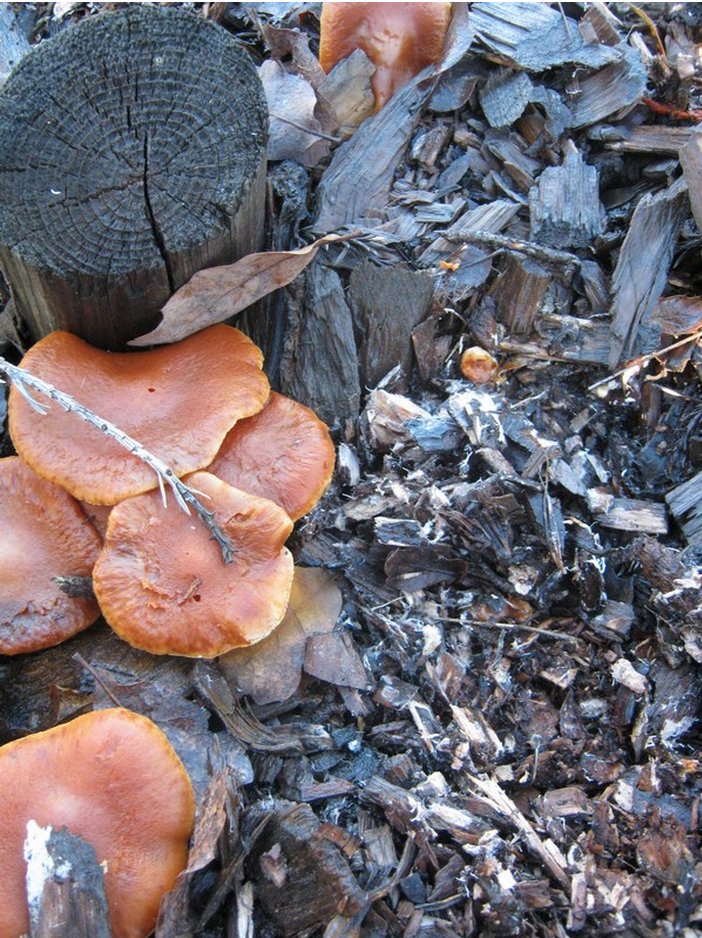 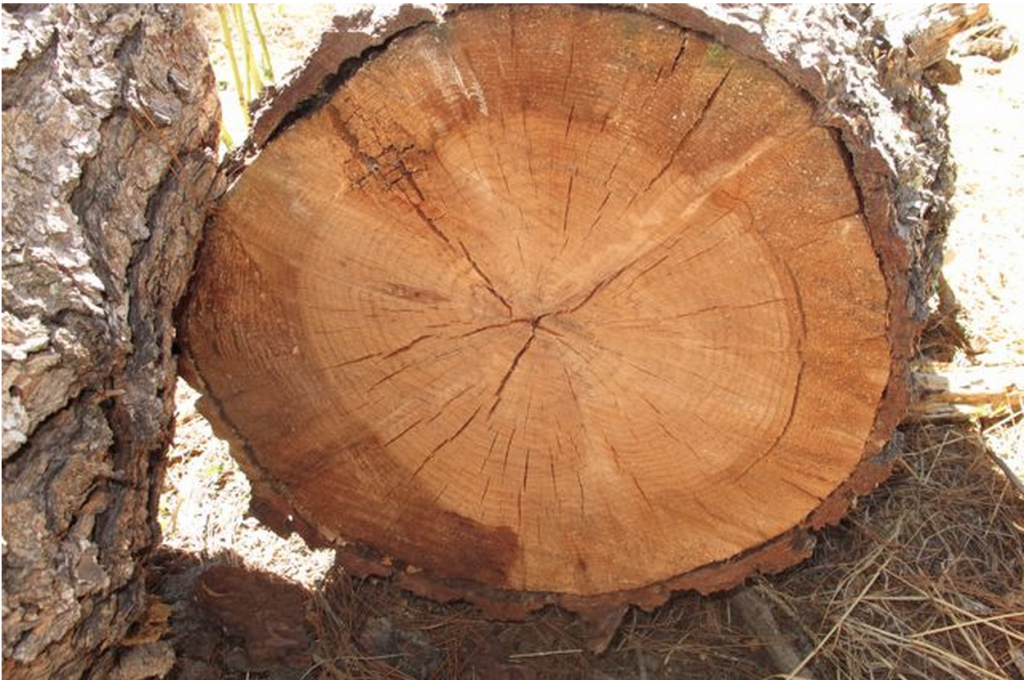 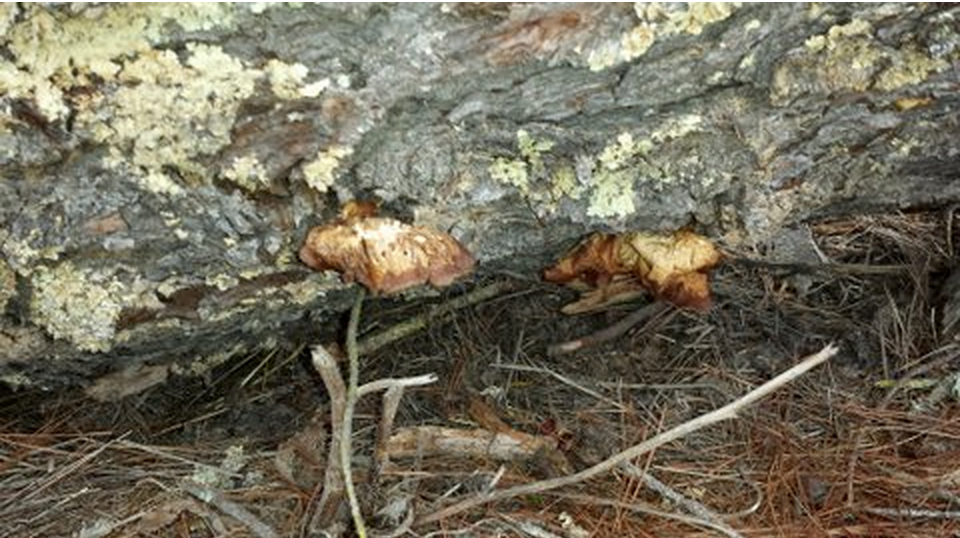 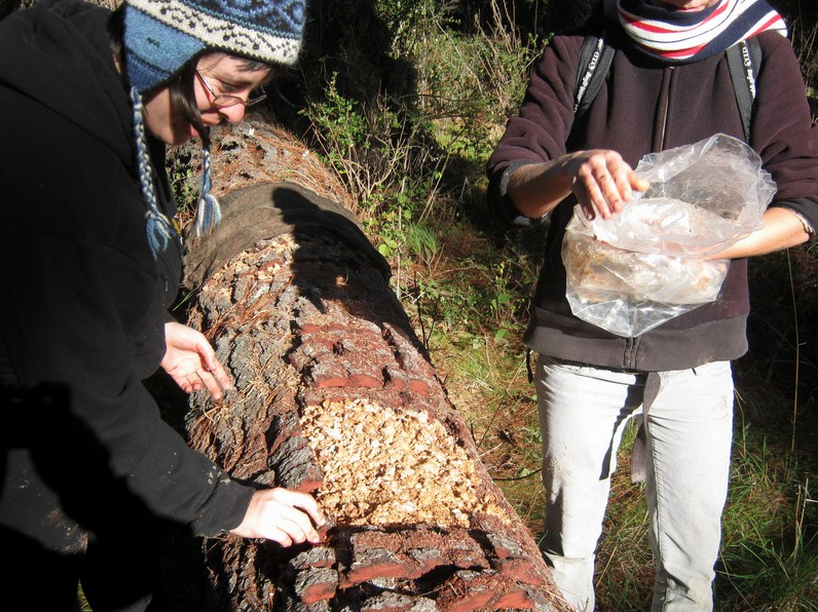 Introduction
On November 13, 2012 three members of BAAM inoculated a freshly fallen Monterey Pine, Pinus radiata, with the spawn of Oyster Mushroom, Pleurotus pulmonarius, with the intention of enhancing the tree’s rate of decomposition. The fallen tree is located in a Monterey Pine grove on the property of the East Bay Municipal Utilities District (EBMUD) in Orinda, California.

On December 10, 2012 four members of BAAM inoculated a second fallen Monterey Pine with different species of mushroom mycelium. This procedure is discussed and pictures are displayed further into this report.

Amendments and observations are added to the end of the report.

Purpose
The purpose of this project is to develop a new method for EBMUD to handle felled and fallen trees that will both A) eliminate the cost of removing fallen trees from EBMUD property, B) keep natural materials on site and C) reduce fire vulnerability.

By introducing mushroom spawn (also known as mycelium) into the freshly fallen tree, BAAM hopes to enhance the tree’s rate of decomposition. Once the spawn has been introduced to the tree, no further modifications will be made. Later stages of decomposition via bacteria and other fungi will occur naturally.

A secondary benefit of introducing mycelium to the fallen tree is a way of storing water inside the tree while the decomposition process occurs, thus potentially preventing the tree from becoming fodder for fires.

This project hopes to create new solutions and act as a source of observation for future projects.

This tree’s decomposition will be observed and documented over the next decade.

What is considered “successful decomposition” hasn’t been determined, however BAAM estimates the process will take five to ten years.

Notes and Observations
The Monterey Pines in the grove were planted in the 1940s. They are considered to be at the end of their life cycle. Because they were planted in a non-native habitat, they are beginning to weaken and fall.

This specific tree was chosen because it had fallen due to apparent natural causes and was still fresh. The tree was in a spacious and shaded grove of other Monterey Pines.

On Documentation
Periodic observation and documentation is necessary to track the results of this project. Checking and documenting changes to the site should occur once a season/four times a year. We don’t know for certain how long the tree will take to decompose. We theorize five to ten years. We don’t know for sure, and we haven’t decided what stage of decomposition is considered “successfully decomposed” enough to prevent it from fueling fires.

Two strains of Pleurotus pulmonarius mushroom spawn were used. The organic material used to inoculate the trees was spawned wooden dowels and spawned wheat straw. The first strain, which was grown on wooden dowels, was supplied by Fungi Perfecti. The second strain, which was initially grown on millet, then transferred and allowed to colonize on wheat straw, was purchased from Amycel.

Equipment: a chainsaw; some drills, drill bits, and batteries; nails; hammer; dowel spawn and straw spawn; rope; a crowbar; paraffin wax; a pot and stove in which to melt the wax; gloves to protect against heat of the wax; a brush to apply the melted wax; burlap bags; water

The Procedure
Six areas of the tree were modified. A large portion of the tree wasn’t modified. The following documentation includes photographs which may help to understand the procedures and materials used.

Sean drills holes into tree. Exposed dowels are shown before they were hammered into the tree

Area 1 is closest to the base of the tree. Sean drilled about 150 holes into the tree with a 5/16” drill bit and plugged the holes with Pleurotus pulmonarius spawned dowels from Fungi Perfecti. By using a nail as a punch, we were able to hammer the dowels about an inch below the surface. I covered a few of those plugged spots with paraffin wax.

Mino scores Area 2 of the tree

Mino scored the tree in a grid with a chainsaw. I stuffed it with Pleurotus pulmonarius straw spawn from one of Mino’s bags. The spawn originated from Amycel. The modified area was then covered with a soaked burlap sack and tied to the tree. The use of the burlap bag was intended to prevent direct sunlight from affecting the area, to trap in moisture, and to allow it to breathe.

Want to learn more? Contact Mino or Sean at email@email.email.

Become a Member
Make a Donation